Sweepy, a 10 year old black and white cocker spaniel, was brought to see Ian Stroud at Vet4life in November 2012. In just a few days Sweepy had gone from being a bright and happy dog to becoming very quiet and sleeping a lot. He was also refusing all food. When Ian examined him he found that Sweepy was lethargic. His gums were also pale and jaundiced. 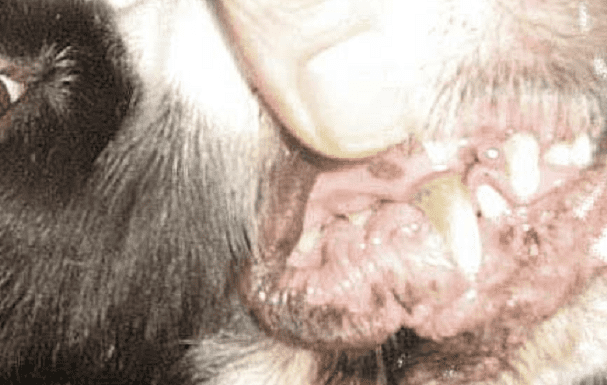 Ian knew Sweepy was critically ill and so he admitted him straight into hospital for emergency treatment and investigation. Blood tests were immediately run in the clinic. Haematology results revealed a very low red blood cell count. Sweepy was severely anaemic.

Anaemia can be due to several causes including blood loss or red blood cell destruction (haemolysis). To test for haemolysis Ian mixed a drop of Sweepy's blood with a drop of saline on a microscope slide. Rather than evenly dispersing when diluted, Sweepy's blood cells immediately formed irregular clumps; a sign of haemolytic anaemia. Sweepy was suffering from a severe case of Immune Mediated Haemolytic Anaemia (IMHA).

IMHA occurs when the immmune system attacks and destroys the body's own red blood cells. IMHA may occur secondary to a range of underlying diseases such as infections, toxins or cancers. In dogs the large majority of cases are idiopathic, meaning that no underlying cause can be identified. The disease is usually seen in middle aged female dogs and certain breeds, including Cocker Spaniels like Sweepy, are more commonly affected.

In IMHA the patient's red blood cells are either destroyed within the circulation or removed by the spleen. As red blood cell numbers fall, the oxygen carrying capacity of the blood is reduced, often to critical levels. Patients may develop lethargy, weakness and collapse. The gums may appears pale or, as in Sweepy's case, yellow with jaundice. Jaundice occurs due to build up of the red blood cell break down product bilirubin in the tissues. As the disease progresses internal organs are adversely affected by poor oxygen supply (hypoxia). The kidneys can also be damaged by the products of red blood cell breakdown. IMHA can rapidly lead to very severe life threatening illness and potentially fatal complications such as blood clots.

Sweepy had a severe anaemia and therefore required urgent and intensive treatment in order to save his life. Fluids were given intravenously to support his circulation and to dilute the potentially toxic products of haemolysis. He was also started on therapy to suppress his immune system and halt the destruction of his remaining red blood cells. Supportive therapy was started with pain relief, gut protectants and special nursing care.

Sweepy rapidly responded to treatment. His owner visited him regularly in hospital to give him a little extra TLC and try to tempt him to eat. Although some severe cases of IMHA may require a blood transfusion Sweepy's positive response to treatment meant that this was avoided. After two nights in hospital he was a lot brighter and much to our delight he finally began to eat again. On his fourth day in hospital he was much improved, his red blood cell count had increased significantly and he was deemed well enough to go home.

Sweepy will require several months of immunosuppressive therapy for IMHA. His red blood cell count needs to be checked regularly and he requires daily medications. He remains bright despite his condition and has responded excellently to his treatment so far.

Well done Sweepy for remaining brave through what has been such a traumatic time.