Late one night, Nina, a 3 year old female black Domestic Short Hair cat, was crossing Teddington High Street when she was hit by a passing bus. Tristan, Vet4life's out of hours vet, received a call from her worried owners and rushed to the clinic to assess Nina's injuries. The accident scene was just down the road from the Vet4life clinic and so emergency treatment was started almost immediately following the accident.

Straight after being hit by the bus Nina was unable to use her right hind leg. There was also a large wound over her right hock with severe deformity of the lower leg. She had a small bleed into her eye, but luckily it was minor so would not cause any long term damage to her vision.

Emergency treatment was started immediately. Nina was placed on a drip of intravenous fluids to support her circulation. Intravenous antibiotics were given to prevent infection of her open wounds and strong pain relief was given to alleviate Nina's discomfort.

A fracture of the hock was strongly suspected due to the deformity of Nina's right back leg. She was sedated for radiography and further assessment. Multiple radiographs were taken to determine the extent of Nina's injuries. In all road traffic accidents, major and potentially life threatening concerns include rupture of the diaphragm, which can lead to herniation of abdominal organs into the chest, bone fractures, rupture of the bladder and other internal injuries. Fortunately, despite the grand scale of Nina's accident with the bus, no injury to her internal organs was detected.

The radiographs of her injured right hind leg confirmed a dislocation of two of the metatarsals, the bones connecting the toes to the hock. Orthopaedic surgery would be required due to the severity of her injury and instability of the joint in right hind hock. While surgery was arranged, a protective bandage was placed on her right hock to stabilise the fracture site and protect the open wounds on her leg.

A specialist opinion of Nina's injuries was sought prior to an hour long operation to repair the fracture. Ian the Vet placed pins and a wire in the right hock to stabilise the joint and allow the fracture to heal correctly.

The image below shows the two post-operative X-rays of Nina's dislocated metatarsals her right hock. They show the wire placed to stabilise the joint and dislocation site: 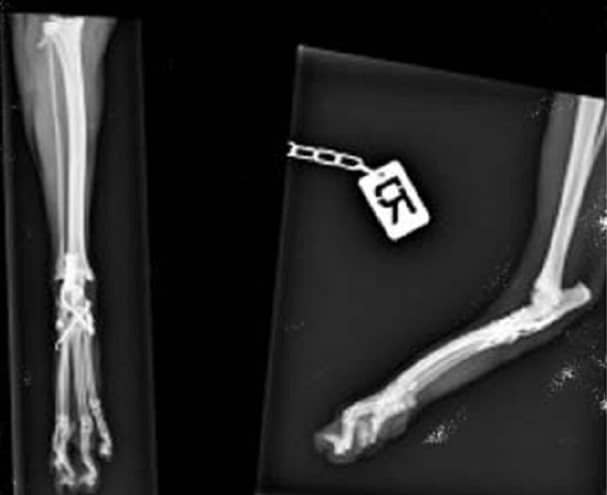 Nina is a beautifully affectionate cat at home, but very nervous in new environments and people. Due to her anxious disposition she required light sedation for her bandage changes and treatment. Despite her anxiety, she was very brave throughout her ordeal and coped with her hospitalisation well. Following her surgery Nina recovered excellently and she was ready to return home the following day.

To allow Nina's dislocated hock to heal correctly she initially required several weeks of confinement in a small cage at home. She is recovering well from her accident. She still requires a prolonged period of rest and TLC, alongside some light physical activity to prevent muscle wastage in her injured leg. We wish her a speedy recovery and commend her for her bravery in the face of a very serious and life threatening accident!