Our Big Bear Award for bravery goes to Esme, a 12 year old labrador and ex guide dog. At the end of 2012 Esme had split a nail on her front right paw. Initially the split did not seem to bother Esme, however over time the appearance of the affected toe slowly changed and the nail failed to heal.

For several months Esme's toe had been treated with extended courses of antibiotics with no improvement. In April 2013 she came to see the team at Vet4life for a second opinion. Over time Esme's toe had transformed from having a small, seemingly innocuous crack in the nail to a swollen and deformed digit. Esme's family were understandably very concerned for their beloved lab.

Alex the Vet trimmed the broken nail back, revealing a severely swollen nail bed and toe.  She examined a swab in the clinic, finding a bacterial infection. A second swab was submitted for bacterial culture and sensitivity. Had the split nail become infected, with infection slowly spreading into the bone (osteomyelitis)? Or had the nail split because of existing pathology, such as a tumour, and then become secondarily infected? An answer would be revealed with histopathology- the toe was severely deformed and unfortunately the only option for treatment at this point would be amputation.

X-rays of Esme's toe revealed significant lysis (bone loss) had occurred, with the nail and lower phalanges (bones of the toe) had been slowly eaten away. To ensure there was no evidence of metastes (cancer spread), chest x-rays were also taken, which were normal. 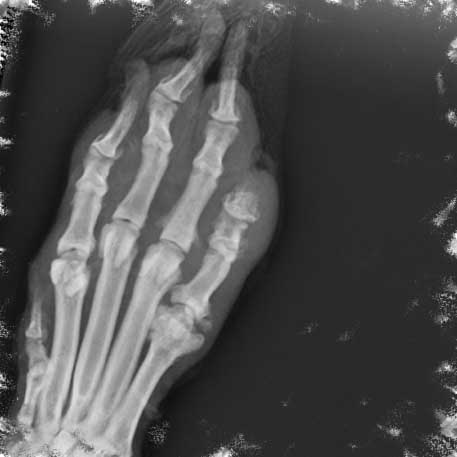 The culture results were very concerning. Three different types of bacteria had been cultured, all showing multiple resistance to all common antibiotics. In fact, Esme's infection was sensitive to only one remaining antibiotic! This particular antibiotic has potential for adverse effects on kidney function, so  prior to any treatment Esme's general health was thoroughly screened with blood tests . She was then hospitalised on a drip while multiple doses of the antibiotic were given intravenously. Esme's health and kidneys were monitored closely.

Following several days of treatment the infection had been brought under control and surgery could go ahead. The toe was successfully amputated in an hour long surgery. Esme remained in hospital overnight to continue antibiotic therapy and ensure adequate post-operative pain relief. She was discharged the following day to recover at home with orders of strict rest and plenty TLC from her family!

The whole amputated toe and surrounding tissue were submitted for examination.  A diagnosis of digital melanoma was made on histopathology. Surgical margins were clear, so the surgery was successful in removing all cancerous tissue. Unfortunately, digital melanoma does carry a guarded prognosis with an average survival time of approximately one year. However, advancements are currently being made in the treatment of canine melanoma patients.

Esme is now doing well and has adapted to life with one toe less. At this point in time there are no signs of spread of the cancer, but will require regular check ups in the future. She is enjoying getting back to her walks in the park with her family and doggie friends. After facing a serious infection and major surgery with much courage we believe that lovely Esme is a worthy recipient of a Vet4life Big Bear Award.