Our latest recipient of a Big Bear Award is Lola, a courageous West Highland White Terrier. Despite being only 11 months old, Lola has already undergone two orthopaedic surgeries to treat the painful skeletal condition Avascular Necrosis of the Femoral Head (the ball of the hip's ball and socket joint).

In May Lola developed a limp in her left back leg and was brought in to see Ian at Vet4life. On examination, Ian found that Lola had wastage of her thigh muscles and had a lot of pain in her left hip. To investigate Lola's limp we took a number of x-rays of her hips under sedation. The X-rays revealed deformity and remodelling of the bone of the femoral head. These findings were consistent with the condition Avascular Necrosis of the Femoral Head.

The first X-ray here shows the femoral head prior to any surgery: 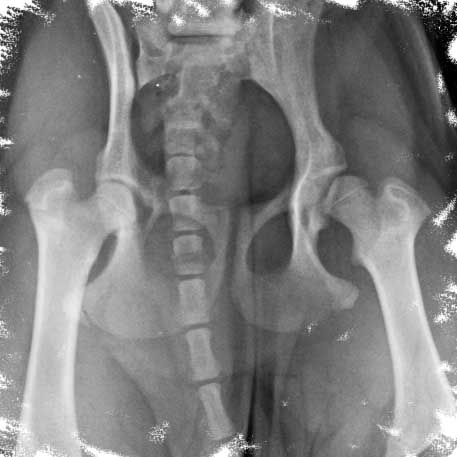 What is Avascular Necrosis of the Femoral Head?

Avascular Necrosis of the Femoral Head, also known as Legg-Calve-Perthes Disease, is a disease that affects toy breed dogs and terrier breeds. The condition usually develops in young growing dogs less than 12 months of age. The exact cause of the disease is unknown, but as there is a higher incidence in certain breeds, such as Westies like Lola, genetic inheritance of the condition is suspected.

In this condition the blood supply to the femoral head becomes compromised. This reduced blood supply detrimentally affects the health of the bone of the femoral head, eventually leading to bone destruction and cartilage deformity. The diseased hip joint becomes inflamed, arthritic and can be very painful.

In order to treat Lola's disease hip and femoral head and neck excision was performed at Vet4life. In this surgery the diseased bone, including the head of the femur, is removed. This eliminates the source of pain for these patients. Over time the body forms a false soft tissue joint to replace the original  ball and socket joint of the hip. Good mobility and use of the treated leg can be achieved following this surgery, particularly in small breed patients like little Lola.

Lola recovered excellently from her surgery and got back to enjoying going for walks soon after surgery. However, several months after her first surgery, Lola's owners noticed she seemed sore in her other back leg. They brought Lola straight down to Vet4life for a check up. On examination it was found that Lola's hip was painful, and when Lola's left hip was manipulated Alex could feel crepitus, a crunching feeling that can be sometimes felt in joints with advanced arthritis.

This X-ray is when she developed Avascular necrosis of the other left femoral head: 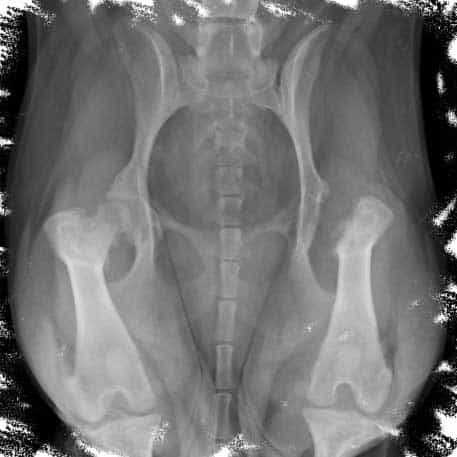 Lola was taken straight to surgery and a femoral head and neck excision was performed on her left hip. During the surgery the joint disease was found to be very advanced with several floating bone fragments in the joint and mineralisation of the soft tissues. The painful remodelled femoral head was removed successfully. Lola made another excellent recovery from her procedure and was soon home again with her owners.

Lola is now well on the road to recovery. She is walking well on both her hind legs and has begun physiotherapy sessions. Thankfully due to her small weight she should regain good to normal function of her hind legs in the long term. We wish  little Lola a speedy recovery and congratulate her on her bravery facing two major operations so early in life!

Here is the X-ray after she has had her second surgery (bilateral femoral head and neck excision): 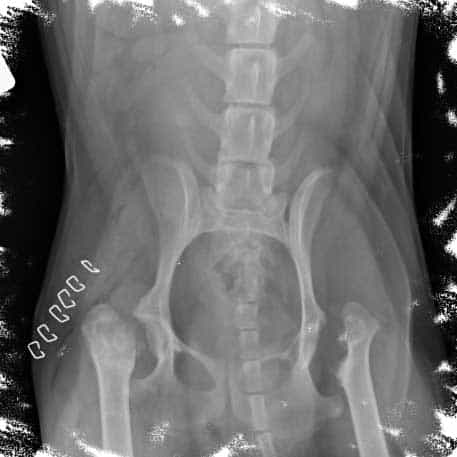