We had the most extraordinary case a few weeks ago. Who would have thought a grass seed could end up in a dog’s spine? That’s exactly what happened! Fortunately, Alfie is now fully recovered and most deserving of a Big Bear Award.

Alfie, 1 year old Hungarian Vizsla, came into Shepperton Vet4life because he had an odd gait in his back legs and pain behind his shoulder/upper spine. A curious question – why was there pain at the upper part of his spine and how and why was that affecting his gait?

MRI of Alfie’s spine showed a 2mm long x 7mm diameter foreign body, circumscribed by a thick enhancing capsule lodged inside the vertebrae. The rest of his spine was normal. 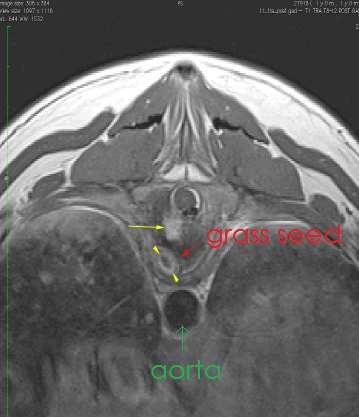 Surgery was carried out in order to remove the foreign body inside the vertebrae. Because we were operating so close to the aorta (the main artery in the body), it required the assistance of a specialist surgeon.

It turned out that it was a grass seed which had got stuck inside Alfie’s vertebrae! We suspect it had been inhaled, entered his lungs and had migrated across to the bones in his spine.

The grass seed had been acting as a foreign body in the spine, something that shouldn’t be there and so was causing pain in his spine, and because there was pain in his spine that made him feel unable to move as freely as he would usually do. So it affected his gait and his ability to play because he felt pain there when he moved.

Fortunately Alfie has recovered so well and is back to his usual happy self. His gait has returned to normal. Well done Alfie!