Godfrey is a young Burmese cat who has calicivirus. Calicivirus is something that we routinely vaccinate against as part of kitten vaccines and yearly boosters. There are various strains of the virus and some are more virulent than others. Infection can be fatal in some cases if signs are severe.

Godfrey was an indoor cat and his signs first showed up at 6 months of age after he escaped out of the house for a few hours - his owners found him nearby, but he seemed lethargic and quiet and didn't want to eat. He had a fever but other than that nothing else showed up on examination. A fever indicates that there may be some inflammation or infection in the body, but there are many different underlying causes. Godfrey was started on anti-inflammatory and antibiotic treatment but the fever didn't subside. He was admitted for fluid therapy and blood tests and imaging to check for any focus of inflammation or infection. He started eating on his own and his fever went away, but when he was sent home the inappetance and fever came back.

He also developed a rash and ulceration in his mouth which prompted us to run viral tests on him. His calicivirus test came back positive. 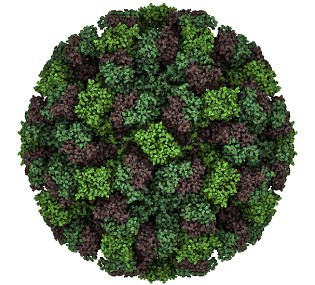 The image on the right is of a feline calicivirus capsid at atomic level.

Godfrey had been vaccinated against this virus as a kitten but it is likely that he was already infected and the virus had laid dormant in his system for many months before emerging and causing signs of illness.

Poor Godfrey developed extensive sores in his mouth and his skin started sloughing off from his pads and other areas on his body. This made it extremely painful for him to eat and as he was still refusing food we had to place a feeding tube to enable him to get adequate nutrition.

He was hospitalised for intensive treatment and kept in isolation as calicivirus is very infectious to other cats. Strict aseptic measures were in place as we nursed him as the additional concern was secondary infection setting in whilst his immune system was busy trying to fight the calicivirus. He had open sores on his skin where the tissue was bubbling and sloughing off. As the virus took hold he also developed facial swelling and ulceration on his face which caused some breathing difficulties.

Godfrey was on a drip continuously and receiving regular feeds through his feeding tube during the day. He was also receiving pain relief and antibiotics as well as antiviral medication. As the ulceration worsened we placed a pain relief patch to keep him comfortable. He was also getting K-laser treatment on his ulcerated skin to encourage wound healing. At times he was very weak as his little body was trying to fight off the virus. We were uncertain whether he would pull through, but he was a determined kitten and fought back bravely.

Godfrey started to turn the corner after a week of intensive nursing care in hospital and was well enough to be discharged into the care of his owners. He had a long course of antibiotic and antiviral therapy and gradually improved with ongoing care. He is currently fighting fit and back to his usual antics at home. Even when he was at his lowest point he showed great strength of character and was a model patient. We would like to award Godfrey a Big Bear Award for this.

Calicivirus cannot be cured and signs can recur at times of stress, so this is something we need to continue to monitor Godfrey for in the future. It is very important that cats are vaccinated against this virus to prevent the spread of it. Please contact us at the practice if you have any questions about Calicivirus in cats.