Dante is a very brave little cat. He has already had to undergo several major operations despite being only 1 and a half years old!

His owner noticed him limping on his right front leg when he came home one day in September but it wasn't certain how he had hurt himself. He had a small wound by his elbow and  it  was a bit swollen so it was possible he had been in a cat fight. X-rays showed a fracture to the olecranon (tip of the elbow). A bony fragment had been pulled away completely from the tip of the elbow and this was causing discomfort whenever Dante tried to walk on his leg.

Dante was stabilised with pain relief and started on antibiotic treatment prior to surgery to remove any existing infection from his wounds. He needed to have a pin and orthopaedic wire placed to reattach the broken fragment. Dante was kept on strict cage rest following his surgery to aid bone healing and prevent re-displacement of the fractured bone. He was also on a course of pain relief to keep him comfortable. He was doing well at home and improving initially but then after 2 weeks his owner came home to find him limping on his left front leg! 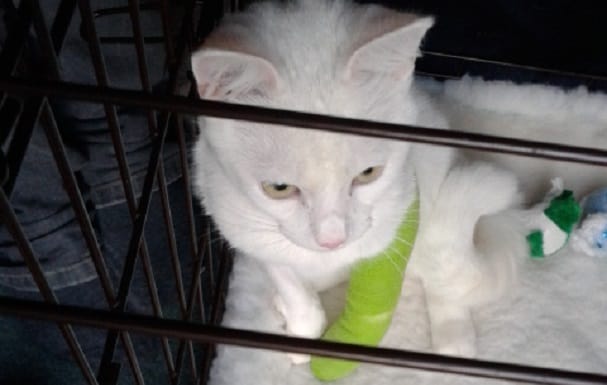 Dante seemed really sore and so we x-rayed the leg and found that he had the same olecranon tip avulsion fracture to his left elbow! In young cats there is a growth plate at the elbow tip-the bone holding the tip onto the elbow is slow to ossify and doesn't fully fuse until the cats are fully grown. It is very unusual to sustain the same injury in both front legs  and a fracture is very painful. Fractures close to or involving growth plates can be tricky to fix as the bone fragments must be stabilised but allow for continued growth to prevent joint deformity and should also be strong enough to withstand weight bearing forces.

Poor Dante had to undergo a second surgery to fix his fractured left leg. Following the surgery Dante had to continue with his strict resting routine-this can be frustrating for a young cat who is keen to play and explore, but Dante was very patient and tolerated the enforced rest and taking medications very well. Dante had to come in for post operative x-rays to check his fractures 6 weeks on from surgery. The right elbow fracture had not fully healed and so the pins and wire were left in place for a longer period. The left side had healed and so the pin and wire was removed under general anaesthetic. Following the removal Dante developed a seroma under his skin- this is where fluid builds up under the skin causing swelling. The seroma had to be drained a couple of times and Dante was started on anti inflammatory medication to reduce inflammation and settle the swelling.

He responded really well to his medication and is currently pain free and getting along very well on all 4 feet. Despite having been in for intensive treatment and having various surgeries performed, he is always keen to have a cuddle and a chin tickle and maintains his sunny disposition. We would like to award Dante a Big Bear Award for bravery. 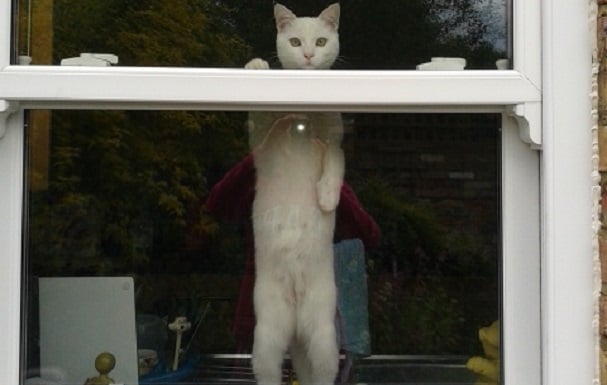