Agatha is a 30g 10 month old Meditarranian spur thigh tortoise. She first visited Alex in the beginning of March, as she had stopped eating and became lethargic. Nothing was found on initial examination but the owners were worried as she was such a tiny tortoise.

As tortoises rely on external heat sources to maintain their body temperature, it is very important they have accurate light and heat. Alex and Agatha's owners discussed temperature gradients and correct light sources and decided to monitor Agatha at home.

Unfortunately she became very unwell, not eating or passing faeces. Her owners became very worried. We took an x-ray to see if there was anything wrong internally.

On x-ray, the vet could see Agatha was constipated and had what looked like a bladder stone within her bladder. This could just have been due to the large volume built up in her digestive tract pushing on her bladder making it difficult to pass anything.

We contacted an exotic specialist who unfortunately reported that if it was a bladder stone then surgery would be the only treatment to remove the stone and her prognosis was poor. This was not good news for Agatha and her owners were heart broken but not ready to give up on her.

Our Head Nurse Sarah contacted her friend, the Senior Veterinary Nurse and Reptile specialist at London Zoo. He kindly came to examine Agatha and suggested that, as she was so tiny, surgery would be difficult and recommended trying medical supportive treatment to help her pass the material causing the problem.

Our team began tube feeding Agatha a critical care solution each day and monitored her weight. We also bathed her in warm water regularly to encourage her to drink, pass urates and faeces.

She passed a very small volume of faeces but still lost weight and refused to eat. Agatha become very sick and the owners made the decision to give her one more week to see if she made an improvement.

Sarah took Agatha out of her vivarium, away from any possibly toxic plants. We could monitor her closely and prevent her eating anything she shouldn't.

She soon began to eat a small amount of dandelions and rocket leaves on her own.

Still losing weight, off colour and  not passing very much at home, the vets became increasingly worried.

As baby tortoises can commonly eat their substrate and bedding in their vivarium,  Sarah requested she was given shredded paper for bedding, thick enough to allow her to bury and hide but nothing she was able to ingest. The vet dispensed a laxative, which was administered daily for 5 days to help her to pass any substrate she may have eaten.

A week later she passed another small amount of faeces. We took another x-ray to see if anything had moved through her digestive system.

Things were beginning to move through and we were finally making progress! We continued the treatment, reducing the number of tube feeds to try and encourage her to begin eating on her own.

She continued to improve and her owners were extremely happy. We stopped  all treatment and weighed her and gave her lactulose twice weekly. She even regained her appetite. 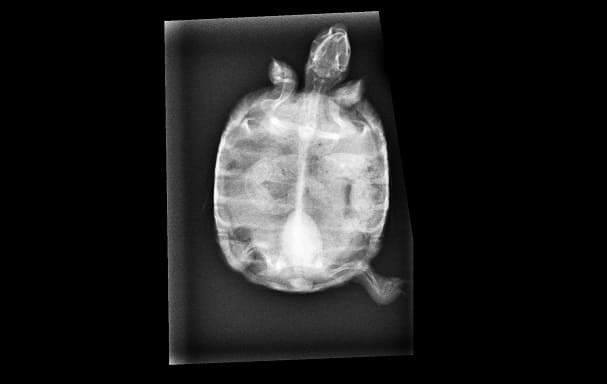 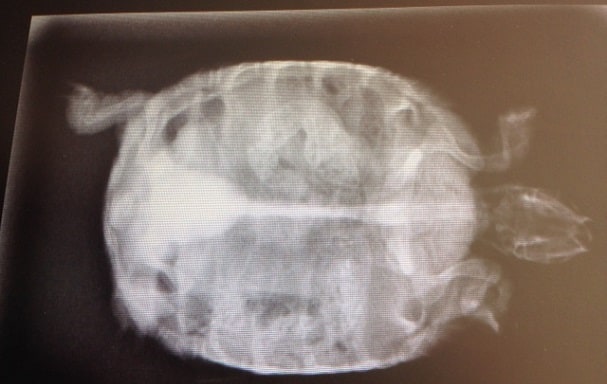 x-ray one week after treatment 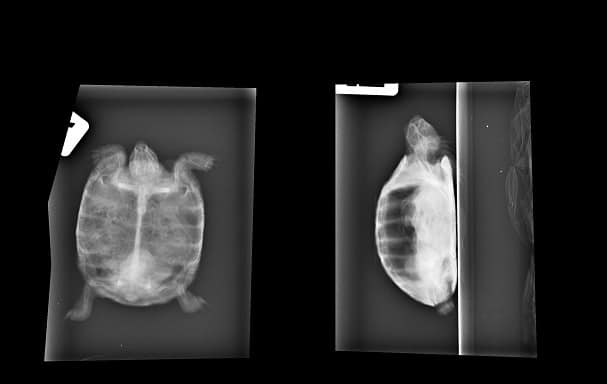 Her final x-ray showed that everything had moved through. She is now, despite all odds, doing extremely well on her own!

Both Agatha's owners and all the team at Vet4life are extremely pleased that Agatha is doing so well. She is now gaining weight, eating very well and back to her normal self. Here is a lovely photo of Agatha enjoying some dinner.