Alfie is a very brave dog who is one of our Big Bear Award winners!

Alfie was brought in by his dog walker Jackie whilst his owner was away. Vet Su was very concerned as Alfie had vomited multiple times in the last few hours and was sore and lethargic.

X-rays of Alfie's abdomen revealed the presence of marrow bone fragments inside the intestines which were causing the problem: 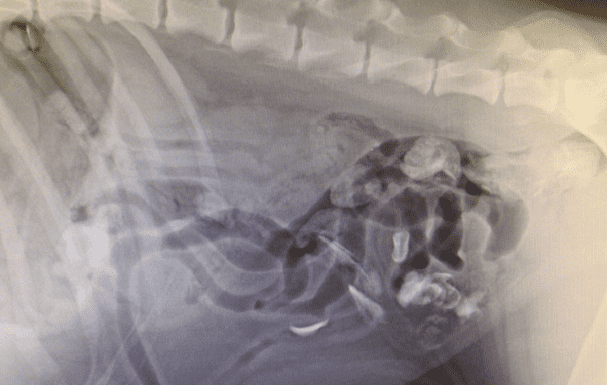 As the bone fragments were quite small we hoped that Alfie might be able to pass them himself. The bone fragments can cause trauma as they pass through the intestines and they can get stuck and cause an obstruction. Alfie's condition was complicated by the fact that he had already had a big surgery to remove parts of his bowel at the RSPCA previously. His owner had been warned that he might not survive another abdominal surgery...

Alfie was initially treated conservatively to see if he would pass the bone fragments. He had daily rechecks and repeat x-rays taken to check for movement of the bone fragments. Initially Alfie did well and passed some bone fragments in his poo, but then a few days later he stopped eating and resumed vomiting. Repeat imaging showed a blockage in the intestines. Alfie was stabilised overnight with pain relief and a drip and, after discussion with his owner, we decided we had to operate.

At surgery Alfie had 15cm of small intestine removed at one site where a bone fragment had lodged due to narrowed diameter of the intestine from prior surgical scarring. He also had a second bone fragment removed from another site. Alfie was kept in overnight for monitoring and initially did well, but the next morning he was very quiet and sore in his abdomen. Ultrasound scanning showed that he was bleeding out into his abdomen and was consequently feeling weak from the loss of blood. Alfie was rushed back into theatre and we managed to stop the bleed but we did need to remove more intestine. We were also concerned about the risk of secondary peritonitis (infection of the abdominal cavity), which can be fatal.

Alfie was weak following surgery and required a blood plasma transfusion. We were concerned that he might not make it through the night. Vet Su spent the night with Alfie at the practice to monitor him closely. Fortunately Alfie showed fighting spirit and pulled through the night following his surgery. From that point on, Alfie made a slow but steady recovery. He came in everyday to have his wound checked and progress monitored. Unfortunately, he managed to lick his wound one night at home when his buster collar was off and no one was looking! This resulted in an infection which made his wound weep and get sore. Luckily we were able to identify the infection early and put him on appropriate treatment before it could cause wound breakdown and deeper infection. He also got itchy as the shaved hair from his tummy started to grow back, so he had to wear t-shirts to cover the area.

Alfie has continued to go from strength to strength since then. He has required a lot of nursing from the whole team - and his owner Sharna - to get him back on his feet, but we are pleased to report that he is back to his usual cheeky self and loves coming in for a fuss and the obligatory treat or two!

We would like to award Alfie a Big Bear Award as he has been so brave. He was always very well behaved even when he was feeling really poorly and we are so pleased he is doing well. Well done Alfie. x