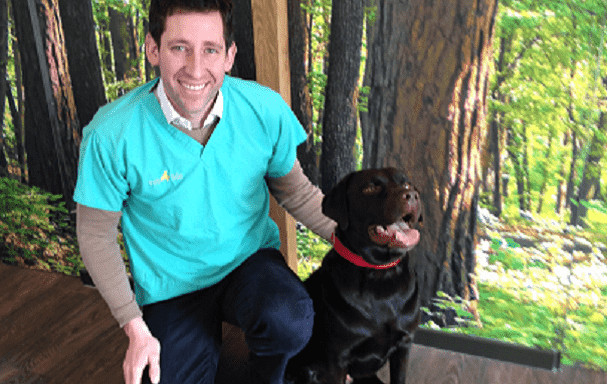 Rolo is a gorgeous young Labrador and is well deserving of a Big Bear award!

Rolo was rushed into the clinic at Surbiton one Saturday after he'd been hit by a car.  He'd been out enjoying a walk in the park with his owner and she was getting him settled in the boot of the car.  Unfortunately Rolo decided he was having far too much fun to go home and jumped out of the boot, onto the road and into the path of an oncoming vehicle.  He was brought straight down to us as Rolo's usual vet was closed.

When he arrived at the surgery, Rolo was clearly suffering from shock but being the brave young man he is, still managed to give us all a wag of his tail as we greeted him.  He appeared to be painful around his hips and front right leg and was generally pale with weak pulses.  He was given pain killers immediately and placed on a drip to help his circulation.  With any sort of trauma such as this there is always a risk of internal damage, even if the dog appears to look normal.  Ian scanned his abdomen using the ultrasound scanner and took some xrays to establish if he had any internal injuries.  The xrays showed he had severe hip dysplasia (a condition where the hip joints fail to develop properly causing lameness and painful arthritis).

He also appeared to have a small amount of fluid on his chest and some free fluid in his abdomen making us suspicious he could be bleeding from his spleen or liver.  After seeking advice from Ian, his owner made the very difficult decision to operate on him to investigate the bleeding.  This was a really hard choice as the risk of anaesthetic and surgical complications were high in his condition, but to not operate could also be potentially life threatening if the bleeding continued.  During the surgery we found his liver was damaged and bleeding in multiple areas.  Ian and Elle managed to remove a considerable about of blood which had pooled in his abdomen and stopped the remaining bleeding and Rolo did remarkably well under the anaesthetic.  He recovered well from the operation, but had to be monitored very closely over the next few days to ensure there were no complications.  Luckily Rolo's owner is a carer herself and was there by his side to make sure he was happy and comfortable and did an incredible job at keeping him calm throughout his ordeal.

Rolo visited us again for a check up a few days later and was considerably brighter than when we first met and had recovered well from his surgery, however he was still very painful on his front right leg and there was concern he could have some nerve damage.  He continued on his pain relief at home and had to remain strictly rested  (very hard for a bouncy young lab!). He came in a few days later so we could xray the leg and he was found to have some soft tissue damage resulting from the car accident.  The rest and pain relief continued at home and when he was re examined the following week he was much more comfortable on the leg and virtually back to normal.

Due to his hip dysplasia Rolo will need to remain on pain relief at home to help keep him comfortable and is now also on a special food which contains supplements to help his joints.  This will need to be carefully managed for the rest of his life with a potential for more surgery down the line if his condition deteriorates.  Throughout his visits to the surgery Rolo has always remained brave, happy and waggy tailed regardless of the discomfort he was in and still loves to come to in to visit us for cuddles and treats! He has made an incredible recovery from a very serious accident and we are all very proud of him and his owner for being so courageous throughout.