On the 21st of November 2016, little Fudge the cat, was found between two parked cars. She was soaked through to the skin, freezing cold and she wasn’t weight bearing on her back leg. Her owner had noticed some blood and thought maybe she may had been hit by a car so she rushed her down to Vet4Life, where Elle examined her.

Elle thought that poor Fudge hadn't been hit by a car, but had been attacked by another animal. There was extensive bruising to her tummy and and there were puncture wounds on her leg. Fudge was very unwell, so after stabilising her and giving her pain relief, she still required overnight care.

In the morning, she continued to receive pain relief and antibiotics to treat her wounds. She went home that night on fluids and a strict care regime.

Fudge came back in for frequent visits so we could see how she was getting on. Even though the wounds were healing nicely and she was beginning to behave more like herself again, her left foot unfortunately had too much damage to it. Sadly her leg had to amputated, in order to save her life. After the operation, Fudge was brought back in for post-op checks. We are happy to say she’s doing so much better and is back to her normal self! 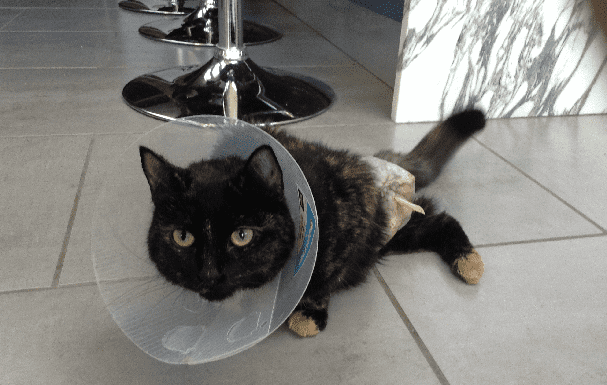 Fudge’s story is an amazing one! She was so ill that both Elle and her owner thought she was going to die, so to see this total turn around is incredible! She has had a tough start to life but with loving and caring owners we are happy to say that Fudge is now OK. Throughout all of this she has been an absolute superstar! That’s why she’s this month's Big Bear award winner.