Bubble is a gorgeous 5yr old black and white domestic short haired cat, who has been extremely brave over the past few months throughout lots of treatment and surgery at the clinic.

He has a history of cystitis and was brought to see our vets at the Surbiton clinic back in December, as he had been struggling to pass urine. His bladder had become blocked which means that he was unable to pass urine, which is very painful and if not treated quickly, due to a build up of toxins within the body can be fatal.

Luckily Bubble's owner's spotted his discomfort early on and he was hospitalised at the clinic. We placed a urinary catheter in order to flush the bladder and allow urine to pass freely. Although the bladder was unblocked this time, there is always a risk that the bladder can become obstructed again quite quickly and unfortunately for poor Bubble he was back again a couple of days later as he had re blocked. He was hospitalised for four days this time allowing us to keep the urinary catheter in place and provide him with plenty of pain relief to keep him comfortable. He was provided with medication and special food to help discourage urinary crystals from forming and causing his bladder to become obstructed again. 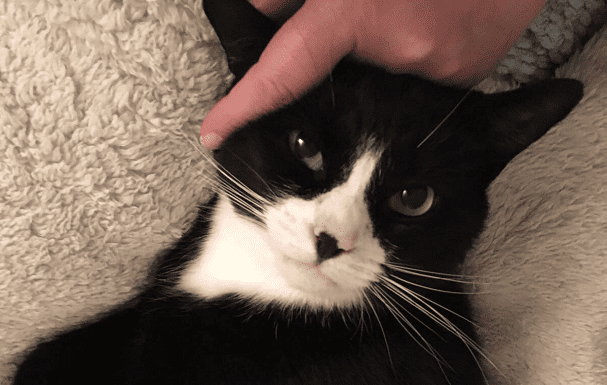 Bubble was brought in for regular check ups over the next few weeks and seemed to be settling well at home. His owners were doing a fantastic job at keeping him calm as stress can often be a trigger for urinary problems in cats. Unfortunately, at the beginning of February he was brought back to the clinic as he had become obstructed once more. We discussed all the treatment options with his owners as they had to consider very carefully Bubble's quality of life including the potential for problems in the future. After some consideration, including the heartbreaking possibility of euthanasia, it was decided that Bubble would undergo a complicated surgery called a Perineal Urethrostomy. In male cats the end of the urethra which allows urine to pass from the bladder is narrow and therefore more prone to blocking. This surgery involves removal of the penis and a new permanent opening in the urethra is created to allow urine to pass freely. Ian and Elle performed the surgery on Bubble and he recovered very well, purring and wanting lots of fuss from all the nurses!

It is still early days and Bubble is naturally still feeling a little worse for wear after his ordeal but is now on the road to recovery. He has been an incredibly brave and affectionate cat through the whole event and we are so pleased to see him comfortable and happy. Well done Bubble!