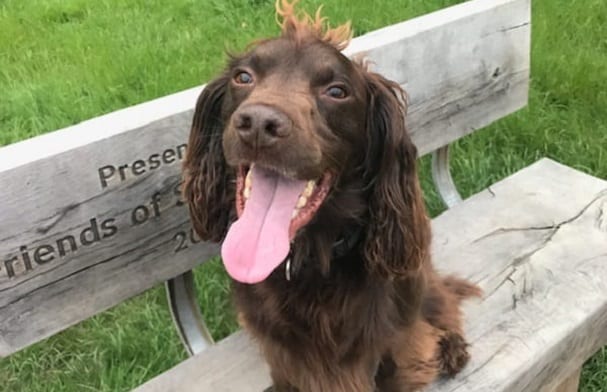 Branston is a cocker spaniel who presented to vet Jodie one morning as he was struggling to urinate.  On examination he had a massive bladder and it was clear that something had blocked his urethra and it was preventing him from urinating.

Branston was rushed in for x-rays and ultrasound which revealed he had a huge fluid filled prostate. Using ultrasound guidance, 40mls of puss was drained from his prostate and a catheter passed to relieve his obstructed bladder!

Prostatic abscesses are uncommon and usually only found in entire old male dogs. Branston is young and castrated so this was an incredibly unusual finding.

Branston made a remarkable recovery from the procedure!  His scan was repeated one week later and another 16mls of puss were removed.  After six weeks of antibiotics Branston appeared like any normal healthy dog. However, when we did another scan, we were concerned that the fluid pockets had started to recur.

The fluid was re-cultured and unfortunately the bacteria had developed resistance to some of the best antibiotics.  There was only one antibiotic remaining that we knew could be effective.  A difficult decision was made to instead take Branston to surgery to perform a procedure called omentalisation in the hope of tackling the abscess for good. Vets Ian and Jodie drained the abscess surgically and a membrane in the abdomen called the omentum was passed into the prostate and wrapped around his urethra.  The idea is that the omentum can act as an internal drain for the abscess to enable the prostate to heal.  The next forty eight hours were crucial in Branston's recovery, however, by the next morning he was urinating normally and with the help of his devoted owners he quickly returned to his happy bouncy self!

Branston remained on antibiotics for a few more weeks and required ongoing monitoring to check for any recurrence of the abscess.  Both Branston and his owners have been remarkably brave throughout this illness.  Prostatic abscesses can be incredibly difficult to treat and have a huge number of very high risk complications.

Although Branston is not out of the woods yet as recurrence is still possible he has coped with everything so brilliantly and still enjoys coming into the clinic for his check up appointments (and belly rubs!)  We hope Branston continues to make a full recovery and we wish both him and his owners all the best for the future.