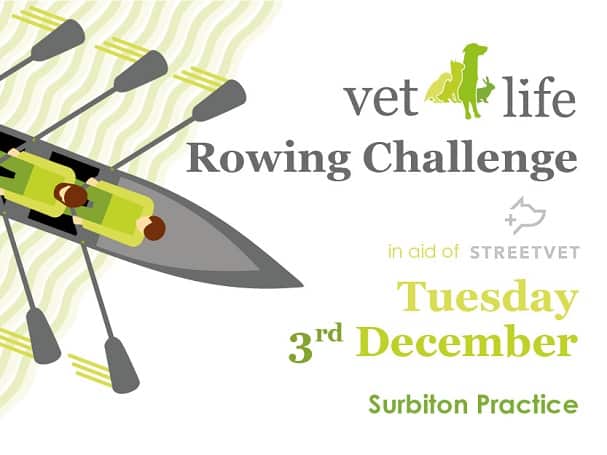 A leading Surrey vets has found a truly ‘oar-some’ way to show its support for an animal welfare charity which helps homeless people and their pets.

Staff from Vet4Life will be putting their backs into a challenge which will see them attempting to row a whopping 100 kilometres on a rowing machine in the reception of their Surbiton clinic, in aid of StreetVet.

Clinical director Vanessa Waite said: “This is the first time we have organised an event like this in the clinic – so you could say we are testing the water, without actually getting wet!
“We are aiming to complete the challenge in seven to eight hours, and we are hoping that our
clients join us for a bit of rowing too!”

Since its inception in 2016, StreetVet, a non-profit animal welfare organisation, has provided support to homeless pet owners who cannot afford veterinary treatment, while educating them on the responsibilities and care needed in animal ownership.

As well as the rowing challenge, Vet4Life is also planning a raffle and asking for donations for StreetVet.

Vanessa said: “We supported StreetVet last year with a collection and a raffle and with the mone raised we bought some items they really needed, such as microscopes and cameras.

“Some of our nurses have volunteered with the charity too so we have a brilliant understanding of what fantastic work they do and how much it means to the people and the animals they help.

“For some homeless people, their animals are the only living souls they have in the world, so charities such as StreetVet are invaluable to them.”

Donations can be dropped off at any of Vet4Life’s three clinics in Surbiton, Teddington or Shepperton.

The charity row will take place on Tuesday, December 3 and is due to start at 10am.