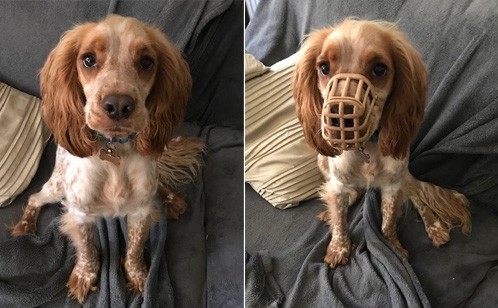 Dexter now has to wear a muzzle to try and prevent him eating random objects.

A dog which was muzzled to stop it eating everything in sight astounded its owners and a leading Surrey vet by eating the muzzle itself.

Dexter, an 18-month-old spaniel, has made repeated trips to Vet4Life, in Teddington, over the last year due to his insatiable, and completely undiscerning, appetite. He has been operated on four times and had vomiting induced three times so he would bring up items.

Among the items he has chowed down on have been a tennis ball, a pair of fishnet tights, chocolate, duct tape, wood chippings, a hair scrunchie, a plastic bag and one of his own toys. Not to mention the muzzle which was being used to prevent him eating random objects in the first place! 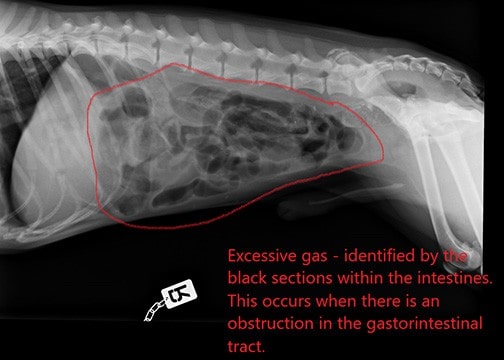 An X-ray shows the build-up of gas in Dexter’s intestines after he ate a scrunchie.

Vet Sebastian Griffin, who carried out many of the operations on Dexter, said: “On four occasions, Dexter required an exploratory celiotomy, which is when a large incision is made down the tummy to identify all the organs within the body. 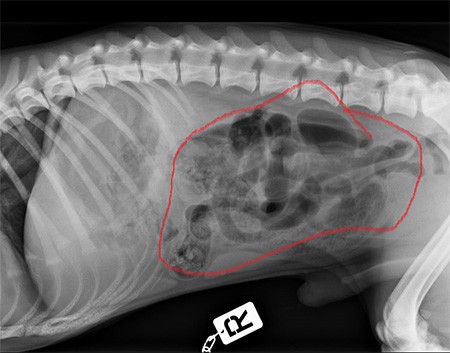 An X-ray taken after Dexter swallowed a pair of fishnet tights.

“On other occasions, such as when he ate 12 chocolates, which could easily have proved fatal, the best way of dealing with Dexter was to make him sick. This involved an injection to induce vomiting. Of course, this is never pleasant for a dog but it is extremely effective.

“Young dogs often eat things which they shouldn’t but Dexter seems to do it more than most. To do four exploratory surgeries on one dog is certainly unusual!”

Sebastian said a good trainer or behaviourist is ideal in situations such as this and there are things which can be done in the home to prevent access to items of potential interest. He said keeping dogs on the lead when walking and keeping a close eye on them is also important. 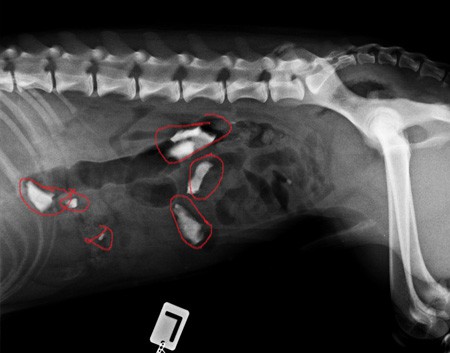 Pieces of a chewed up tennis ball can be seen on Dexter’s X-ray.

Andrew Gumpert, who owns Dexter along with his wife Teri, said: “It all started with him eating his way through the contents of one of my daughter’s clothes drawers about a year ago and it’s continued ever since.

“We got him a muzzle but it appears Uncle Casper – our older spaniel – helped him to loosen it to the point where Dexter could get his teeth into it and proceeded to eat it.
“We hope it’s just a playful puppy thing and he’ll eventually grow out of it as at the moment we can’t take our eyes off him for a minute. He’s a beautiful, loving dog but he is also very mischievous.”