How long is a piece of string?

If you think staff pets are immune to getting sick, think again! We had one of our receptionists, Jordanna’s cat Lux, who visited us recently after playing with string and swallowing it. This is not the most uncommon problem when it comes to our feline friends. As part of exploring their environments, they may inevitably come into contact with some yarn, ribbon or as we approach the festive season - tinsel. The reason why we are so concerned with these objects is that, unlike other objects which may pass through the gastrointestinal tract naturally, these long objects can get trapped and cause the guts to bunch up around it resulting in the gut bursting. This in turn leads to complicated infections of the around the intestines which can require lots of treatment, usually over several days. 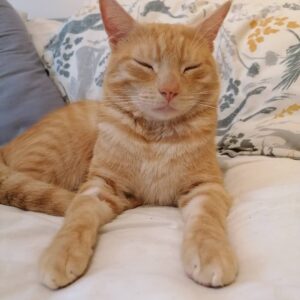 Back to our lovely Lux. Jordanna brought him in saying he had eaten a piece of string which was estimated to be between 30 to 50cm and had vomited afterwards. Our vet Jenny’s recommendation was to perform a sedation to keep him as still as possible to get the best pictures of his belly. On the x-ray, the signs were clear that his intestine had started to bunch up which made the situation more pressing and after careful consideration, the decision to operate was made.

The surgery revealed string in the intestine which was able to be milked into the end part of the gut. This has a much better outcome because it means we don’t need to cut into the intestine and instead, allow nature to take its course!

Continued care is crucial for these cases. Lux was transferred to our out-of-hours provider to ensure he remained comfortable and stable on the fluids and pain relief plan we put together for him. Luckily for him, after another day of close care where he was eating, drinking and weeing normally, we felt confident to send him back home. His wound was also starting to heal very well.

Alas, the offending object had still been elusive and not been passed! It took a trip home where he felt more comfortable for the string to thankfully appear.

Acting quickly in these situations is key. Lux had a good outcome because we were able to assess him fully in a timely manner. If you have concerns with your pet eating anything with strange new signs, don’t leave it too late so time is on our side. For all you know, you may arrive with stress or concern only to be met with one of our staff who may know exactly what you’ve been through! 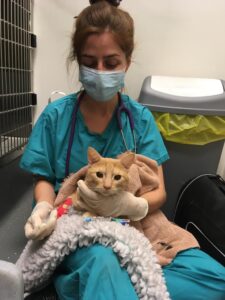